EA SPORTS™ is preparing to release the latest installment of its hit franchise in NHL®17, and the company is leaving the cover athlete up to the fans.  Eight NHL superstars were selected to represent the NHL® 17 cover athlete, and after several rounds of voting St. Louis’ Vladimir Tarasenko is in the finals.  The team at BiState Law Center has cast their votes, and we’re hoping to push #91 onto the cover. 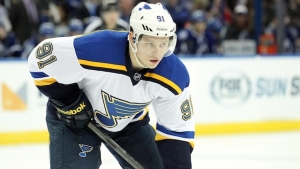 To cast your vote visit the EA SportsNHL 17 Cover Vote (or click the photo). There’s no limit on how many times you can vote, so feel free to visit often and get Tarasenko onto the cover.

You can also cast your vote on Twitter using the player hashtags. Use #NHL17Tarasenko in your tweets and posts.

About the Author: Matthew Nagel

Matthew Nagel is a Missouri Workers Compensation Lawyer who is dedicated to defending the rights of people that have been hurt at work against insurance companies. He is an avid St. Louis sports fan, soccer player and eager to answer any questions you may have about your work comp case or how the law can work to your benefit. Contact him at matt@bistatelaw.com.

The choice of a lawyer is an important decision and should not be based solely upon advertising. The information offered on this website is not formal legal advice, nor does viewing it form an attorney client relationship. Any results set forth herein are based solely upon the circumstances of that particular case and offer no promise or guarantee upon the outcome of any other case.

This site is not intended to solicit clients outside the State of Illinois or Missouri.